David Benjamin Blower And The Book Of Jonah

The apocalyptic folk artist shares all on his latest two records

It’s always a pleasure to catch up with Dave Blower. Last time we met up, it came with the added bonus of hand ground coffee from a funny little machine he had lying about in his kitchen! Upon drinking said coffee, he agreed to do a short interview about his latest project ‘The Book Of Jonah’ which, I would argue is his most ambitious project yet, and is about to be released on the unsuspecting world on 13th March, through our friends at Minor Artists.

So, here it is. If you’ve not come across Mr Blower before, you may want to pick up the story so far here, here or even here.

Jonny Mellor: Before we get on to your new release, could you fill us in on what’s been going on since we last heard from you. ‘Welcome the Stranger’ seemed like a very important release- has it opened any new doors for you or even changed your practice or methodology?

David Benjamin Blower: Welcome the Stranger is a collection of folk protest songs about the refugee crisis. Of course, since last Spring when the record came out, the world has changed and countries like ours have become very unwelcoming. The record is themed around Jesus’ story of the sheep and the goats, and the notion that to reject the suffering stranger is reject Jesus himself. The last year has been hard to watch.

This is the first record where I’ve used songs to tell real people’s stories, of living and dying as refugees. Having played these stories in different places, so many people have come up to me and asked, “What can I do? Where can I send money? Where can I volunteer?” I’ve been struck by the importance of telling people’s stories as an artist. We can do things the news can’t.

JM: Your new release ‘The Book Of Jonah’ follows the path set by ‘Kingdom vs Empire’ and is a book and album (the book is called ‘Sympathy For Jonah’). How did this project come about?

DBB: This happened haphazardly. I started writing a musical of the story of Jonah, mostly out of a fondness for the Bible, Moby Dick, Pinocchio etc. and while I was putting together songs about how terrible things were in Nineveh, I saw on the news footage of ISIS blowing up the tomb of Jonah in modern day Nineveh; that is, Mosul, in northern Iraq. I thought to myself, “I wouldn’t want to go to Nineveh either.” The news about ISIS (back in 2014/15) became so disturbing that I lost all taste for the musical and started, wide-eyed, writing a book about how frightening real enemy love might actually be. Everyone picks on Jonah for his lack of warm feeling towards the enemy, but I don’t see many of his pious critics marching off to Mosul to make peace with the regime there. And any historian will tell that the Ninevites (Neo-Assyrians) were more dreadful than ISIS, by a long way.

The book was published last summer, and then after that, rather more soberly, I finished recording the musical retelling. 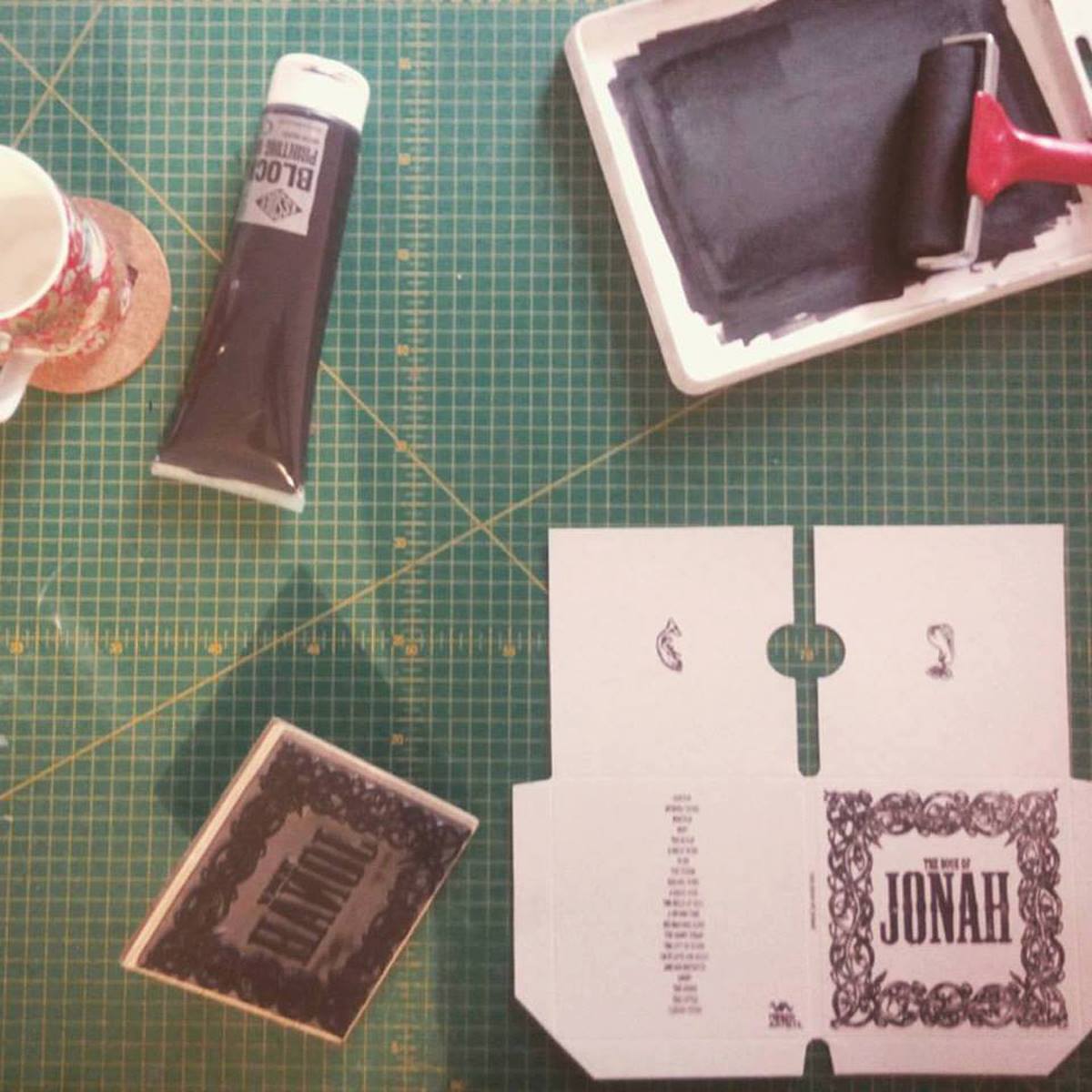 JM: I know it has been gestating for a while and I imagine that there has been a weight to living with these ideas for so long before being able to finally unleash them on the world. How do you manage to contain such a strong prophetic vision (alongside the accompanying passion and restlessness) without it eating you up?

DBB: I think it probably does eat me up. I don’t know if you can make good art about something without allowing yourself to swallowed up by it. If you’re not battered by the journey, then where did you go, and what do you have to tell? Perhaps this is why artists have often been considered dangerous by controlling societies. We’re unhinged openings for dangerous and unpredictable kinds of power to enter the orderliness and disrupt it: in this case, grace, forgiveness, re-humanisation of the enemy, redemption of the irredeemably evil, etc. The prophetic job is to bring in this dangerous new thing, not, I suppose, to always come out in one piece.

Living with this story over the last few years has also been interesting, because the contemporary subject matter has changed. When I began, the monster of public discourse was ISIS. Today, many struggle to see people like Trump, Farage and Le Pen as human beings – an attitude which is quietly and dangerously transferred onto all those who support them. I also know people on the right who can only talk with disgust about “liberals” and people on the left. Who wants to go Jonah-ing over to the terrible other now?

JM: At Sputnik, we usually draw quite a thick line between art that is made for Christians and art that is made for a universal audience. You are something of an exception to this rule, as you are one of the few artists that people who aren’t Christians still want to eavesdrop on, even when you’re speaking primarily to Christians. ‘The Book Of Jonah’ would be a project like this as your focus here does seem to be Christians and the church. Can you tell us about about how you see the Christian artist’s responsibilities to speak to the church and to the world and how that works for you?

DBB: You mean that our art is best when it speak to a universal audience, and not into the Christian bubble, I think?

I agree. But of course, stained glass windows, cathedrals, orthodox icons, choral evensong and the KJV were made for Christians, and yet they’re also delighted in by a universal audience, because they have integrity. When we look uneasily on art made for Christians, I think we usually mean the sort of art made by evangelicals for evangelicals in decades past, which we’ve come to distrust as a sort of matrix designed to keep us in the fold. But for me it would be dishonest to make art stripped of Judaeo-Christian aesthetics. This is the well I drink from, and plenty of outsiders want to drink from it too.

I find the present moment a very exciting one to work in, because the post-secular mishmash has now become the fact (where it is accepted that religious narratives of all sorts are sloshing everywhere, and nothing is neatly contained or separable). Meanwhile, the old sacred / secular divide is collapsing. We could gone on about what all that might mean for a long time.

JM: The Book Of Jonah then- give us the hard sell. Why should this release be added to our bookshelves and Itunes libraries?

DBB: The Book of Jonah is a radiophonic production of the biblical story, read in it’s entirety from the old King James bible by the deep voice of theologian Professor N. T. Wright, whose wisdom and wit illuminates the narrative. Jonah himself is played by the theologian and activist Professor Alastair McIntosh, in his wheezing Hebridean sea-dog’s tones. The story is punctuated with dark folk ballads and awash in spaghetti western soundscapes.

Sympathy for Jonah is a series of meditations on the biblical tale, delving into the necessity, and the dreadful cost, of enemy-love, for all of us. Especially in these divided times. It’s short. I’m told it’s funny, though I didn’t particularly mean it to be. And it gives theologically digestible exploration of both the Book of Jonah and of the cross of Jesus.

JM: What’s next for you? How are you going to promote this project and have you got anything else in the pipeline?

DBB: I’ll be spending time performing The Book of Jonah where I can; lounges, bars, churches and gatherings, and holding discussions around the themes of the book. There’s always something new in the pipeline, but I’ll focus myself on planting our community garden and gathering some theological learning groups in the coming months.

Thanks Dave. As always a pleasure. And if you can’t wait until the 13th March, here is an exclusive little preview of a track called ‘Sackcloth and Ashes’to whet your appetite…

Trees, songs and creation care: an interview with Lydia Hiorns

Newcastle-based artist Lydia Hiorns is reclaiming the messy and dangerous world of nature to inspire a 20-track musical project.

A thriving arts scene is a common good that blesses many: so we've helped to fund Tom Elliott's 'Big Local Night Out' project.

Land, place, and beauty in forgotten things: the work of Luke Sewell

Art as an act of aspirational joy: an interview with Joanna Karselis

Composer Joanna Karselis talks about her journey so far, and the struggle that birthed her new EP—which was funded, in part, by Sputnik Patrons.

Kapes A. Witness is searching for the right words

Birmingham rapper Kapes A. Witness talks through how faith has changed his artistic practice, and his new project supported by Sputnik Patrons.