The tension between total dedication to art, and the working out of faith

At the age of 72 Michelangelo began work on a pietà (a work depicting Jesus dead after being taken down from the cross), probably for his own tomb in Santa Maria Maggiore in Rome. 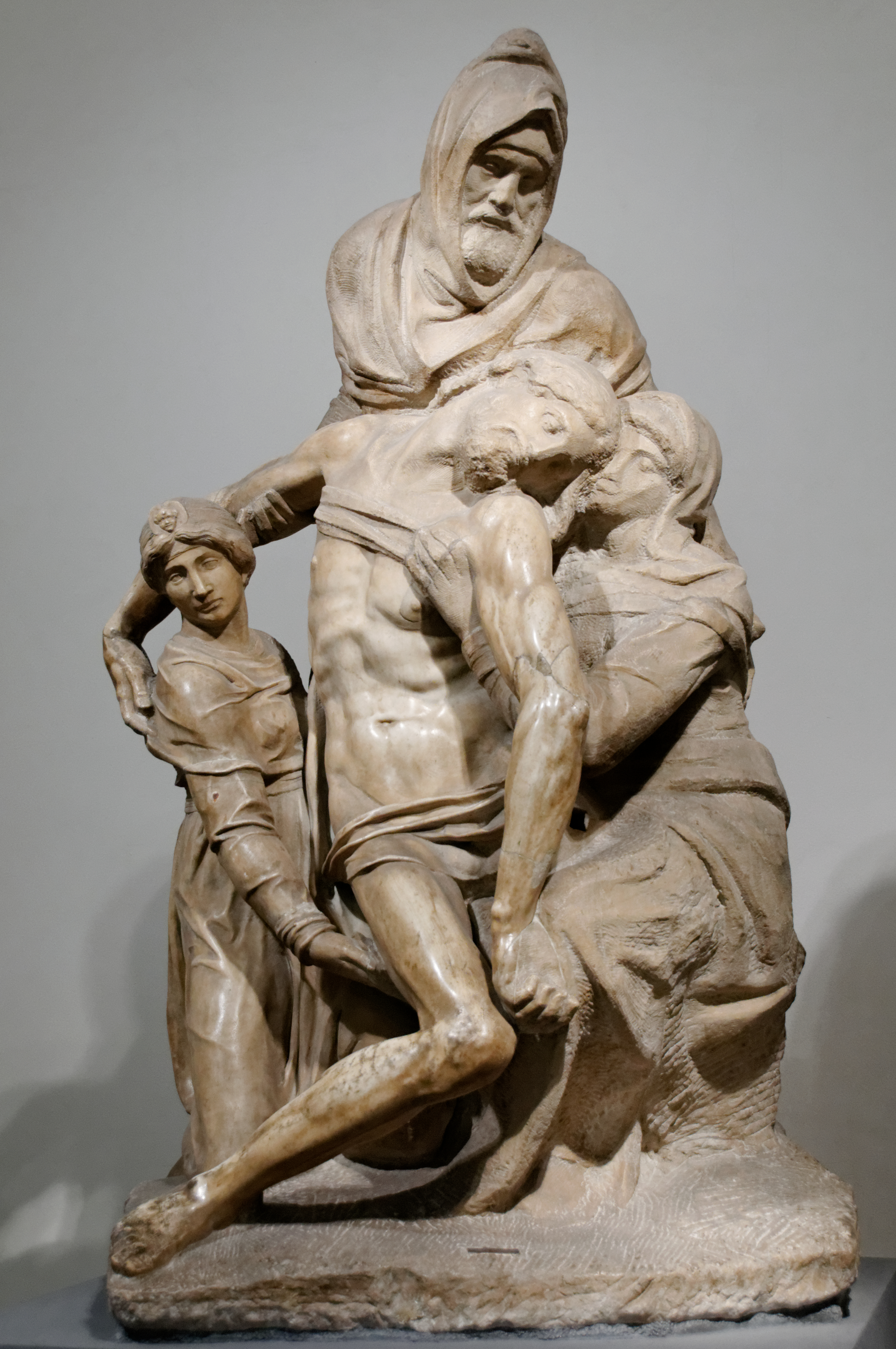 Unlike his previous pietà which depicted Mary holding the body of Jesus across her lap, this one showed Mary and Mary Magdalene on either side of the dead Christ. Behind Jesus, passing him down from the cross was the hooded figure of Nicodemus, his bearded face based on Michelangelo’s own.

Michelangelo never finished the sculpture: after eight years’ work he took a hammer to it. (There are many theories about the destruction: it might have been frustration at flaws in the marble block, or concern that the identification with Nicodemus would result in problems with the newly established Roman Inquisition). The fragments were gathered and reassembled, and now the unfinished pietà is displayed in the Opera Duomo Museum in Florence  together with two marble panels carved with Michelangelo’s sonnet 65 in Italian and in English.

On the Brink of Death

The course of my life has brought me now

Through a stormy sea, in a frail ship,

To the common port where, landing

So that finally I see

How wrong the fond illusion was

That made art my idol and my King,

Leading me to want what harmed me.

My amorous fancies, once foolish and happy

What sense have they now that I approach two deaths

The first of which I know is sure, the second threatening.

Let neither painting nor carving any longer calm

My soul turned to that divine Love

Who to embrace us opened His arms upon the cross.

It was the middle stanza that caught my attention: how wrong the fond illusion was that made art my idol and my King, leading me to want what harmed me. This is Michelangelo acknowledging the tension between total dedication to his art and the working out of his faith. For me, those lines set out the distinctive challenge for any artist of faith: to create the deepest, strongest work, putting our whole selves in, but at the same time to acknowledge that art is not ‘it’, is not everything.

How do we do that? Let’s get two small things out of the way. First, religious subject matter doesn’t get one off the hook: Dante spent a lot of his Divine Comedy getting back at the people of Florence. Secondly, neither does an attitude of ‘oh that’ll do.’ As if somehow the fact that art is not ‘it’ excuses the half-hearted, the half-baked and the half- … yes, well. It does not.

So what will help? The exact answer is going to be different for every artist, but there are two things which I think move towards an answer: character and community.

Character, because that is the internalised result of the lived life of faith, which enables the artist to make good judgements: at a minor level, to make the proper choice between a poem and a prayer meeting (some days it may be the poem, some days the prayer meeting). At a higher level, for example, to acknowledge that a particular project needs to be shelved or abandoned or radically refocussed.

Community, because that brings the accountability beyond the individual conscience and raises questions beyond the immediate concerns. I know that I have benefited from reading and considering some of the posts on this site. And preferably a community of artists, as they will understand the specific issues better than a community of, say, management consultants. Outside of a community we are thrashing about on our own in a very large sea.

I’m not saying those two on their own will makes us as good as Michelangelo (I wish), but they may help us produce our best possible work without messing up ourselves or the lives of those around us.

A writer based in Newcastle-upon-Tyne, writing fiction, poetry and script (for theatre, schools and puppets).

No really, Can Maps be Art?

Can Maps Be Art?

Where Is The Line, Chris Donald?

Where Is The Line, Luke Tonge?